What is Cuprian Tourmaline 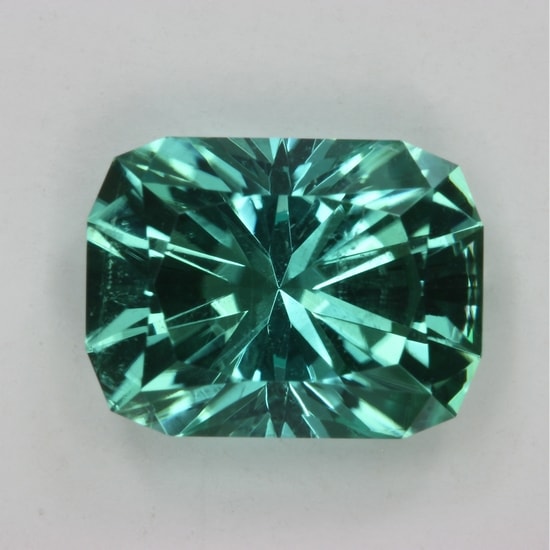 I have been thinking about this quite a bit lately because of opportunities to sell some stone and the need to price them. The pricing of top quality gemstones is always a problem because subtle differences between stones can lead to quite a bit of difference in price. And being responsible in naming a gemstone is important in not deceiving the consumer.

So what is missing from a tourmaline, which can be of many different colors, that derives at lest part of its color from copper, to make it worth the values put on it? It is the glow/neon/vivid property of the color/hue. The hues of cuprian tourmaline are in many cases not unique, especial in the green to blue range of “paraiba type” material from Mozambique because iron can and does produce identical hues. But nothing out there in tourmaline land can produce the visual impact of a quality cuprian tourmaline. The “neon” look basically can not be photographed since the attempts I have seen, end up looking like the stones have been over exposed. I believe the exceptional brightness is generated by the eye/mind, by producing the sensation of the generation of light, not just the reflection of light, in the cuprian tourmaline (This certainly includes Paraiba/paraiba type tourmaline with the right chemistry). Iron bearing tourmaline such a sea foam and paraiba like hues from Afghanistan can have wonder colors and be very bright, but do not have the visual impact of a quality cuprian tourmaline.

So the bottom line is that without the “glow/neon/vivid” appearance, cuprian tourmaline is not worth the present prices I see it being advertised for. Many times it is badly included from both its natural load of inclusions and the process of heating. (I have been told that clarity enhancement is rampant with cuprian tourmaline/paraiba like, etc.) I do think that cuprian tourmaline has a series of hues in the purples that can stand on their own, with or without the “neon glow”. The purples formed by copper and a higher oxidation state of manganese can be exceptional and fill in the blue/purple area of the color wheel (along with beautiful shades of reddish purple). Which is the hardest range of colors in the rainbow for tourmaline to fill. Every time I examine my large high grade purple tourmaline that I was fortunate to get before copper was discovered in Mozambique, I am moved by its beauty. Thanks to copper, the world of color in tourmaline has been greatly enhanced, but having copper as a chromophore in tourmaline does not guarantee a valuable and attractive gemstone.