Observations on the Color Change phenomenon in Tourmaline. 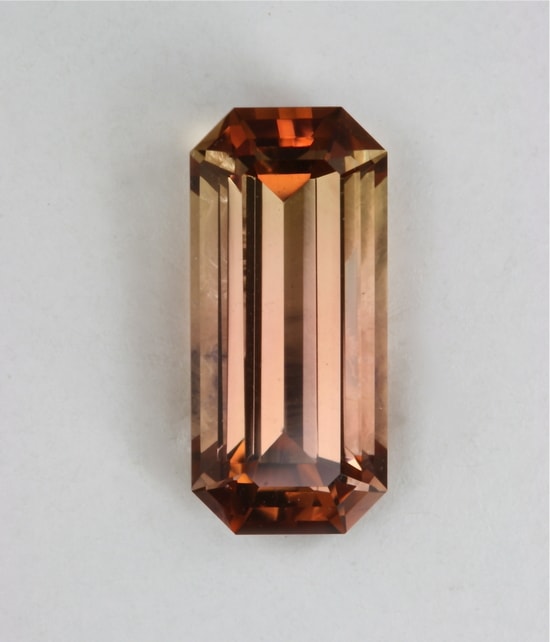 On this page I will present my observations on color change in tourmaline. I will be covering the following four spectral areas of change, red to orange, yellow/brown to green, green to blue, blue to purple (Laurellite). The last one is a recent discovery, since the discovery of cuprian tourmaline in Mozambique, and I have covered it extensively on this site. A more technical discussion on color change with an emphasis on Laurellite, can be found on the page titled “Not all change in color is COLOR CHANGE”.

I have been surprised enough by finding an orange tourmaline (when observed under incandescent light) in a box marked pink, to think that orange to pink is not that rare. But I really have no idea. With incandescent lighting going “out of style” and the intuitive feeling that the use of other yellowish light sources is in appropriate in seeing the “true” color of gemstones, the simple addition of yellow to red/pink to make orange doesn’t seem like a valid color change/shift effect. Still I have red/pinks that are completely immune to the color shift/change phenomenon and the ones, that are the subject of this page, that react very strongly. (I intend to investigate this area of interest with my spectrometer and post more scientific date on it.)
If it can be shown that at least some of the red/pink in natural light to orange tourmaline in incandescent light, meet the criteria set for by Yan Liu as described on the page titled “Not all change in color is color change”, it would be a “reverse” Alexandrite color change. And another mark against the traditional theory that attempts to explain color change by differences in the absorption bands in a gemstone and the spectral distribution of the illuminating light. There is a complete disregard for the non linear nature of the eye’s response to color.

Finally I don’t think that the market has much interest in the world of orange to pink/red tourmaline outside of whether it is a pretty gemstone. It would certainly be a much bigger deal it was in chrysoberyl, with its alexandrite. Such is the fate of many interesting phenomenon in tourmaline.

2. I have limited personal experience with a color change from green to brownish yellow. I have only one medium sized oval that I did not buy as a color changer, but I have looked around enough to know that it is not a fluke. On top of that, I looked inside with my spectrometer and found that my specimen is related to chrome tourmaline. This means that it is probably a Dravite, the species, rather than Elbaite, the principle species for faceted tourmaline.

Chrome tourmaline has a very distinctly different absorption graph than either Verdalite or green cuprian Elbaite. Its twin absorption peaks on either side of the green range of wavelengths are quite symmetrical when the gemstone has the wonderfully saturated green hue/color. As the gemstone becomes yellower, the right absorption peak declines and seems to spread out toward the red end of the spectrum. The color changer I am talking about in this section, fits into the curve of declining asymmetrical curves. I wish that I could have the gemstone analysis to support my observations with the spectrometer, but that is not in the works for me.

As far as the trade is concern this strange bed fellow is just another tourmaline with a dynamic color that slides around green in natural light. On top of that, the final determination concerning the degree of color change will have to wait until I can determine the shift in hue angles between its brownish yellow phase and green with my upgraded spectrometer.