Dusk and a Pastel Seedless Watermelon 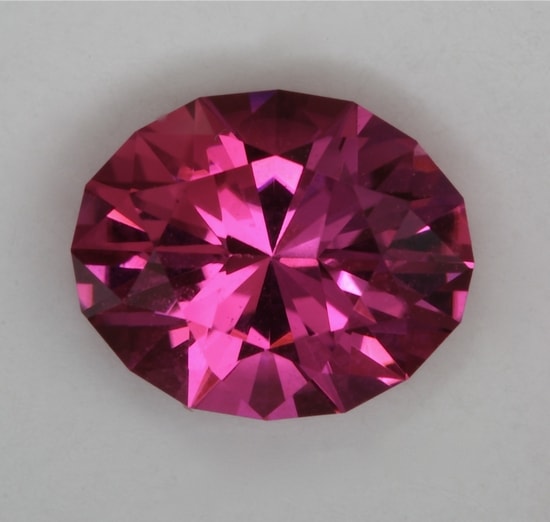 Nd obtaining all the colors of tourmaine I

I think that nature’s gift and the name, watermelon, given to tourmaline with a core of pink coated in green after a thin layer of colorless crystal is a fantastic combo. It has sold a great deal of low grade tourmaline and introduced many people to beauty in tourmaline, that does not have to be flawless. It goes even further than this, to the point where slices of watermelon tourmaline, either made into cabochons or tumble is the only way people recognize tourmaline at all. So where does that put the forlorn faceter when a bright smiling face asks whether he has watermelon tourmaline?

The color distribution displayed be watermelon tourmaline is not that uncommon in tourmaline. And it certainly is not limited to watermelon’s color combination. So why are there such a limited number of examples in my collection? The answer to the question has three parts. (one) The thickness of the coating (commonly known as skin) on tourmaline is either too thin or included to be incorporated into faceted gems. Most faceted stones are really bicolors, cut with their tables parallel to their principle axis rather than perpendicular to it. This rather technical point does not effect the price or appropriateness of the designation because “watermelon” is an informal name in the gem trade. (It has no legal definition and really doesn’t need one because people know what watermelon looks like.) (2) Genuine watermelon tourmaline is best displayed in slices cut across the crystal’s principle axis rather than being faceted, where the mixing of the colors caused by the cut is not desirable. (3) And the final reason is personal. I am committed to both faceting and obtaining all the colors of tourmaline I can. So that is where my effort has gone into building the collection.

I do have examples of faceted stones with a watermelon style color distribution, but no true watermelon tourmaline with two possible exception. One is a beautiful Afghan tourmaline with a pale pastel pink center and a thick dominant coating that is flawless. When I point out the stone’s pink heart, people are excited, but I usually have to point it out to them. The other example is one of the more unusual stones in the collection. It has a medium pastel pink core and a moderate pastel blue green skin, with a thin pale separation layer. The whole rough crystal had enough uniformity and flawlessness to make a presentable emerald cut. And the finished stone has balanced bands of blue green on either side of the pink core that is richer at the ends of the emerald cut. It is not a large stone, but people find it fascinating even if none of them realize that it is a watermelon tourmaline! It makes me smile. Another feature of this stone of interest is shared by other pastel colored stones. When the sky is still bright, after the sun has left the sky, its colors are enhanced and deepened to an exceptional and beautiful degree.

I certainly have beautiful bicolors and other multi colored stones in my collection and I love them all. Some of them were purchased without realizing I was getting tourmaline that had their color in “zones”. Zones of color or banding are usually not terms used with tourmaline. It is quite common with gems like amethyst and is not considered desirable. There are times when the mixing of colors in tourmaline can “muddy” the stone’s final color, but on the whole I love the effect. One of my most beloved stones would probably be called a bicolor in the trade. It is a large, over 10 carat, emerald cut that grades from a spectacular rich pastel pink to very pale pink of the same hue. I purchased it as just a pink, but it is so much more to me.